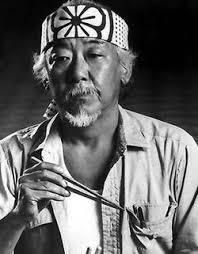 Today is day six without a cast. I have been doing Physio like an Olympic athlete. And today I’m in a lot of pain. Today will be a stretch day.

My new fascination is how our bodies compensate for pain. The first few days after having my cast removed I wanted to use my hand, so I would try and lift or move things gently just to see if I could. I was surprised to see that it was already possible until I saw myself in the mirror brushing my teeth and realized that I was compensating using the rest of my body. My hand doesn’t want to twist and so I have been contorting my elbow and shoulder in order to give it angling that it would not normally have. Consequently, this has caused a lot of shoulder and arm pain 🙂

So, I decided to treat my recovery the way that Mr. Miyagi trained Ralph Maccio in The Karate Kid. Yes, I know there is a new karate kid and I watched it… but the real karate kid (In my opinion) is, and always will be, the one with Ralph Macchio.

Anyhoo, in case you didn’t see the movie, there is a scene where Mr. Miyagi trains Ralph Macchio to do karate but getting him to wash cars and paint fences. Ralph gets upset about it. He doesn’t understand. But Mr. Miyagi insists that he does it perfectly and in the way he instructed. And then…the magic moment comes where Mr. Miyagi reveals that all of the practice Ralph has done can be transferred into karate!!! It was one of my early movie memories and it was SUCH a great moment!! Here it is: https://www.youtube.com/watch?v=e1cCjWKWKb8

So, after three days of compensating for the pain and discomfort of twisting and bending my new wrist, I decided to Mr. Miyagi everything. Now I move slowly, consciously methodically without compensating. When I lift my mug full of tea, I concentrate on it. I squeeze it with my fist and I lift it straight up while bending at the elbow. When I brush my teeth, I concentrate on all the tiny muscles of the wrist that move with each angle of the toothbrush and I make sure not to move my shoulder or adjust my elbow in a funny way. It hurts like bloody hell sometimes and I have to call upon my left hand for reinforcement, but I refuse to compensate to change from the normal movement. (Our wrists are quite amazing with their many motions). I’ll let you know how this new method works out!

Yesterday, I attempted to vacuum our house. We live in a 1970s cottage that is fully carpeted. (50-year-old carpeting might be a bit sketchy from a sanitary perspective, but nobody loves wall to wall carpeting as much as me. I hope it comes back into style soon…but with eco-friendly carpeting.) It Took an hour to vacuum three, small rooms. Instead of concentrating on cleaning I focussed on using my wrist. Push.Pull.Turn. Reeeeaaal Slow. No sudden moves.

And, today I am exceptionally stiff and sore…but with a clean house.

I love it when a superhero in a movie gets shot or stabbed and then the camera moves to the wound which heals in seconds. I wish wounds would heal that fast but, in the grand scheme of things, I guess it’s a pretty quick turn around. My hand was dangling off my arm only 6 weeks ago. Kind of amazing really. #keepingthefaith #bepatient